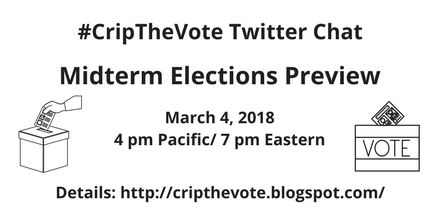 The U.S. Midterm Elections will be on November 6, 2018. All 435 seats in the U.S. House of Representatives and 34 of the 100 seats in the U.S. Senate will be up for election, as well as 39 state and territorial governorships, and thousands of state legislature seats and local elected offices.

Information on the 2018 Midterm Elections

Follow @GreggBeratan @AndrewPulrang @DisVisibility. When it’s time, search #CripTheVote on Twitter for the series of live tweets under the ‘Latest’ tab for the full conversation.

If you don’t use Twitter, you can follow along in real time here: http://twubs.com/CripTheVote. If you might be overwhelmed by the volume of tweets and only want to see the chat’s questions so you can respond to them, check @AndrewPulrang’s account.

Check out this explanation of how to participate in a Twitter chat by Ruti Regan: https://storify.com/RutiRegan/examplechat

Check out this captioned ASL explanation of how to participate in a chat by @behearddc.
https://www.facebook.com/HEARDDC/videos/1181213075257528/

Introductory Tweets and Questions for the Chat:

Welcome to the #CripTheVote Midterm Elections Preview chat! Please remember to use the #CripTheVote hashtag when you tweet. If you respond to a question such as Q1, your tweet should follow this format: “A1 [your message] #CripTheVote”

Q1: What are your initial thoughts about the upcoming Midterm Elections? Are there any specific outcomes you are hoping for? #CripTheVote

Q2: Name some key disability issues you believe candidates for office should know about and take positions on. Think not only about national office, but also state and local offices. #CripTheVote

Q3: What is your approach if you like a candidate’s other positions, or really despise their opponent, but they have a poor voting record or positions on disability issues? #CripTheVote

Q5: Are there specific disability issues you consider “deal breakers” or “litmus tests” for whether or not you can support / vote for a candidate? What is your take on “single-issue” voting? #CripTheVote

Q6: Please tell us about any candidates with disabilities you know of who are running for office in 2018. If you can, include their names, party affiliations, the offices they are running for, and their Twitter handles. #CripTheVote

Q7: Tell us about candidates running in 2018, disabled or not, that you will be watching closely because of their positions or records on disability issues. #CripTheVote

Q8: What can we all do to press candidates to address disability issues, both individually and through coordinated efforts like #CripTheVote and #RevUp?

Thank you for joining the #CripTheVote chat previewing the midterm elections. Please continue the convo and join us on 4/8 for our next chat reviewing the results from our online survey.

There is still time to participate in the 2018 #CripTheVote survey on disability issues. We want to hear from you! There are 2 ways to participate. The online survey, using SurveyMonkey:
https://www.surveymonkey.com/r/GYVC653

Text only version, to complete and email back to us: https://docs.google.com/document/d/14Nx903WoomOWD4h7P3E5zBjKY732ja_oVYgyWeAib3s/edit
Posted by apulrang at 7:42 PM

In 2017, I joined the Women’s March on Sacramento in an old, large, clunky, medical-grade, standard-issue wheelchair I borrowed from my church. At the time my options were to use this wheelchair or stay home. Thankfully, since then I’ve acquired my very own custom chair!

My experience in 2017 was better than I expected considering it was the third time I had ever used a wheelchair. I was grateful to participate without my entire focus on the pain and fatigue that comes with walking and standing too long. I carried a two-sided sign that read, “Cure Ankylosing Spondylitis” and “Healthcare keeps this pussy alive.”

Using the chair, I had expected to constantly fight my way through crowds and keep people from sidestepping in front of me or falling on my lap. I was pleasantly surprised. People were polite and eager to make sure I could freely move. I didn’t feel like an object they tried to avoid – people saw me first, and the chair second. This was refreshing. And, even though I could not make it through the dense crowd to the ADA area up front, an organizer moving against the crowd wove her way sideways to reach me to tell me about its existence, if I could make it there.

Overall, my experience was pleasant because of the humanity of the attendees at the march, rather than the organization and design of the march itself. I was simply happy to be able to participate at all.

I was absolutely on board to attend any future Women’s Marches. Humanity had been restored.

Then, after a year of using my own wheelchair I was able to look back at the experience and see the accessibility gaps I wasn’t even aware of then. For one, I wasn’t aware there was an ADA area until the middle of the march. Second, there were no signs directing people such areas. Third, marketing leading up to the event hadn’t included accessibility information.

And I noticed a similar pattern leading up to the 2018 march. The website didn’t have any accessibility information.

I spoke up about this at a listening session with the 2018 organizers a couple weeks before the March. I added that people with disabilities are one of the most marginalized and vulnerable groups in America and we often feel unheard and invisible. Inclusivity is paramount to our ability to thrive. I said that I would be happy to share more at another time.

In response I was asked to do a walk-through of the rally setup and offer suggestions.

And I was asked to be a speaker at the rally.

Fearing I was the only disabled voice being heard, I couldn’t refuse. If my speaking up could shed some light on even the smallest missed opportunities to make the march and rally more accessible, then I would make a difference. All the while I knew this approach needed to be more robust the following year; after all, I am magnificently ill-equipped to represent every accessibility need.

All that said, my experience as a speaker for the rally was great! There are things I wished I could have done, like participate in the march itself, but I had to choose speaking over marching this year. My health would not have allowed for both.

Here is a link to a video of my speech as well as the transcript: Click here for the video.

Lastly, I do want to speak to accessibility for marches in general.

I have heard a lot about how the Women’s Marches have a lot of work to do to be more actively welcoming and inclusive of people with disabilities. I think this claim can be made of almost any march for any cause, not just the Women’s March movement. I believe the Women’s Marches are taking the heat directly as a result of being the new kid on the block. I see this as an opportunity to use the Women’s Marches as a pilot program to remove the kinks and set an accessibility standard and protocol for all future marches to follow.

We have miles to go for full accessibility and inclusion, but we are in this moment now and must do what is in our power to hurry up change. And I am rolling with it. 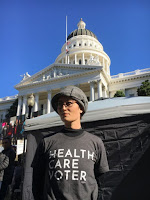 Charis’ story has been featured in dozens of publications, including Arthritis Today Magazine, Mother Jones, and CNBC. She has spoken on healthcare panels, with pharmaceutical organizations, and in legislative hearings. In 2014, Charis was awarded the Progress in Policy Award by the Arthritis Foundation, Pacific Region for her efforts in Statewide and National legislative advocacy efforts (watch her in action).  She leads the Sacramento area Spondylitis Association of America Support Group, is on the CreakyJoints Patient Council, and is a speaker with the Stop Stigma Sacramento Speaker’s Bureau. Charis is additionally a member of the Standing Committee of the Episcopal Diocese of Northern California and will be a Deputy to the 2018 General Convention of the Episcopal Church in Austin, Texas.