Change of Plan for the Next #CripTheVote Chat 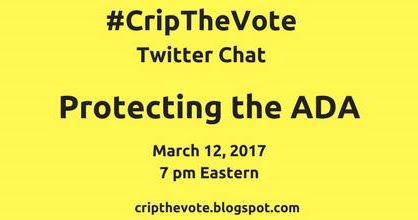 It looks like an "ADA notification bill" has been re-introduced in Congress, and the risk of it passing is probably greater now than ever before. We have decided to postpone our March 12th chat on "Disabled People in Public Service," and instead host a discussion on "Defending the ADA." The date and time will be the same ... Sunday, March 12, at 7 PM Eastern, but the topic will be different. The public service chat will be held at some later date.

House of Representatives bill H.R. 620: ADA Education and Reform Act of 2017, (click the link to see details of the bill), would require a waiting period and documented efforts at resolution for Americans with Disabilities Act complaints before private lawsuits could be filed. If you experienced an ADA violation, you would not be able to sue until you first contacted the business owner to try and resolve the problem, and waited a certain amount of time to let them fix the problem, before being allowed to sue. The most often cited reason for this is instances of disabled individuals and their lawyers filing dozens of ADA lawsuits against businesses, supposedly completely by surprise, and supposedly to make money off out of court settlements. That's the story anyway.

Obviously, there's another side or two to this narrative, and in the next few days we will post some questions that will structure our chat. Stay tuned, but in the meantime, change your calendars accordingly!
Posted by apulrang at 9:54 AM