Whew … it’s been some week, some year, and some 4 years. The co-partners of #CripTheVote, Andrew Pulrang, Gregg Beratan, and Alice Wong, invite you to a Twitter chat on November 15, 2020, 7 pm Eastern to share your thoughts about the 2020 election. Please note this will be a 30-minute chat.

Follow @GreggBeratan @AndrewPulrang @DisVisibility. When it’s time for the chat, search #CripTheVote on Twitter for the series of live tweets under the ‘Latest’ tab for the full conversation.

If you might be overwhelmed by the amount of tweets and only want to see the chat’s questions so you can respond to them, check @DisVisibility’s account. The questions will be Tweeted approximately 6-7 minutes apart.

Welcome to the #CripTheVote post-election Twitter chat! Let’s hang and unpack a bit. Remember to use the #CripTheVote hashtag when you tweet. If you respond to a question such as Q1, your tweet should follow this format: “A1 [your message] #CripTheVote”

Q1 We are glad to have you join us today! How are YOU doing? How are you processing the results and recovering from #Election2020? #CripTheVote

Q3 What are some major policy issues and changes in the Administration that are needed to undo the damage to marginalized communities including the disability community? #CripTheVote

Q4 There’s a lot of work ahead. What kinds of advocacy is needed by the disability community to advance our issues both on the ground and in local, state, and federal government? #CripTheVote

Thank you for joining us today! This concludes our #CripTheVote post-election chat. Please keep the conversation going. A recap of this chat will be up shortly. For more: http://cripthevote.blogspot.com/ 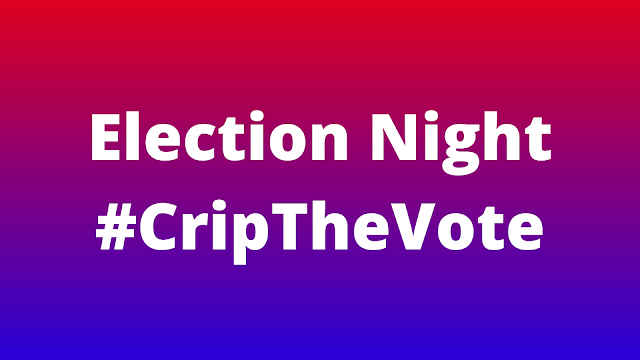 As we approach Election Day and whatever occurs in the days after, here are some helpful resources to help us all manage our worries, hopes, and reactions. Special thanks to Jack Rosen, Voter Engagement Specialist at the National Disability Rights Network for sharing some of these links.

American Association of People with Disabilities

When To Expect Election Results In Every State

American Association of People with Disabilities

Social Media Toolkit: Managing Expectations for Election Results & Why We Must #CountEveryVote

How We Manage November 3rd And Beyond

Feel free to join us on Twitter anytime to discuss the results and ongoing developments as they happen. Just include the hashtag #CripTheVote to add your tweets and replies to the conversation. Whatever happens and whatever the outcome, lets continue to support each other and keep the disability community involved and engaged!

Email ThisBlogThis!Share to TwitterShare to FacebookShare to Pinterest
Labels: Information

Many thanks to artist Micah Bazant for creating this image just for #CripTheVote! Feel free to share and be sure to check out and support Micah's artwork: https://www.micahbazant.com/

Image description: Illustration with large red text: "Crip the Vote" above two disabled queer people of color surrounded by flowers and radiating love. One person is Black, uses a wheelchair and a ventilator, and has a drink with a plastic straw on her tray. A butterfly is resting on her wrist. The other person is Chinese American, fat and uses a cane. Artist credit: Micah Bazant 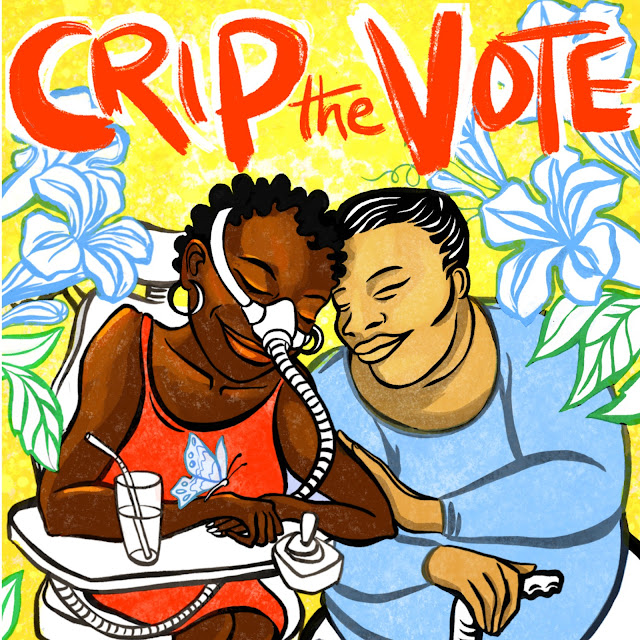 Tell us a little about yourself!

I have ADHD and other learning disabilities which made studying certain subjects a struggle. History, writing and government were always what interested me and what I seemed to excel at in school and what really captured my interest. I also always wanted to fight to ensure other students with learning disabilities would have the same support and opportunities I had growing up, so becoming politically active was kind of a natural fit.

What is your role at National Disability Rights Network and what are some things you are currently working on as Election Day approaches?

I am the National Disability Rights Network’s Voter Engagement Specialist. I create content to get people excited to vote, help expand our get out the vote efforts, and provide training and technical assistance to the P&A network. As Election Day approaches we are releasing several more videos for our series sharing that highlights the issues that matter to activists and everyday voters with disabilities.

For disabled people who encounter barriers accessing voter information or casting a ballot independently and privately, what can they do? What are some resources or places they can contact?

You can contact your local member of the Protection and Advocacy Network for any questions you have about casting your ballot independently or what accessible options you have to do so! You can find your at https://www.ndrn.org/about/ndrn-member-agencies/.

You can also call your local county election’s office, to ask in advance what accessible voting options are available. If for any reason they refuse to provide accessible options, you should contact your state’s P&A as well as the Election Protection Hotline at 866-Our-Vote (you can also text that number or use the chat function on their website 866ourvote.org)

Voting remains difficult for many disabled people across the country and during this pandemic in particular. What are some concerns you have that will impact voter turnout?

This election is a bit odd, in that turnout is likely to surge for certain segments of the disability, but not others. The proliferation of vote by mail, and especially accessible absentee ballots, combined with the spread of early voting, have the potential to make voting easier for a large number of people with disabilities. However this is not going to be the case across the board. Unfortunately not every jurisdiction has accessible absentee ballots available, and that is going to negatively impact turnout in those areas for voters who are blind or have certain disabilities that make it difficult for them to fill out a paper ballot or use a non-accessible machine.

One of the biggest concerns when it comes to turnout this year are folks in congregate settings, such as group or nursing homes. A lot of those individuals have had very little outside contact since the start of the pandemic, and in some areas we have seen resistance to bringing in people to assist with the voting process in those settings due to fear of spreading COVID. So there are folks in these settings who aren’t getting the support they need to cast their vote, and that is a big problem.

Finally we are concerned about the impact long lines could have. For voters with limited mobility, chronic pain, or other disabilities the length of these lines is a real concern. No one should have to wait hours to vote, and long lines could have a disproportionate impact on those voters.

Why are you passionate about voter engagement? What plans do you have on voter outreach and education in 2021 and beyond since people should care every year, not just during midterm and Presidential elections?

I’m passionate about voter engagement, because I think a lot of people don’t realize how much power we have as voters. I’m not here to say voting is a cure all for every problem facing society, but rather that you genuinely can improve things at a very real level by voting. The individuals we elect can have a tremendous impact on our everyday lives.

Which brings me to the second part of this question. Next year we want to do a series educating voters on the significant role that local elected officials have on setting policies that impact the lives of people with disabilities. Everything from how a local planning commission can impact how accessible the sidewalks are, to how an elected district attorney can impact if people with mental health disabilities get jail or treatment, to how the people you elect to your school board can have an impact when it comes to providing adequate resources for students with disabilities. We want to highlight the connection between deciding who your local elected officials are and the everyday issues that can affect both quality and quantity of life for people with disabilities.

Visit https://voterswithdisabilities.org We have a great collection of videos featuring a range of voters talking about all the issues that matter to them. And feel free to use the link to submit your story! We are always trying to get the stories of voters with disabilities out there to create the representation that is often lacking in mainstream get out the vote campaigns. We want to share your story, what issues matter to you, and what motivates you to be politically active.

Diagnosed with ADHD and other learning disabilities as a child, Jack’s parents had to fight his school district to ensure they honored his IEP. In high school he spent two years at Winston Prep in New York City, a school focused on enabling those with learning disabilities to succeed. While there he witnessed his friends and classmates, who were attending with government funding, have to go through annual tests to prove they still needed the services that Winston provided and could not be sent back to the schools that had failed them in the past. While Jack was fortunate enough not need to do these tests, watching the stress it caused his classmates had a profound impact on him as he was exposed to the inequity of the education system. After two years in New York City, he returned to upstate New York, where he graduated from Doane Stuart in 2012.

At Skidmore College, he earned a B.A. in Government. During his junior year, he was inadvertently  elected to student government, and ended up serving for two years representing student club presidents. There he fought for reforms within the student government system, to give the student run clubs greater representation. In college he interned for a local newspaper, an affordable housing lender he would later work at, and Sen. Chuck Schumer. In 2016, during his senior year of college, Jack joined the state senate campaign for a local union organizer. As Communications and Regional Field Director, Jack helped implement voter contact strategies.

After the campaign Jack spent a year working in the affordable housing  industry. In 2018 he moved to Washington DC to earn an M.A in American Government from Georgetown University. After completing his degree, Jack worked as a freelance strategic communications consultant before joining the National Disability Rights Network in 2020. At NDRN, Jack develops non-partisan messaging to engage and increase participation of voters with disabilities in the electoral process. He collaborates with civil and disability rights organizations to enhance voter engagement nationally.

In his spare time he enjoys skiing, playing video games and rooting for his beloved and beleaguered New York Jets.